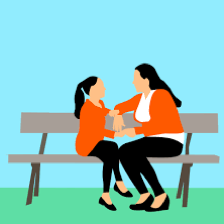 How much language does a child need to hear to become bilingual? [Season 1, Episode 2]

Bilingual children grow up in many different circumstances. In some families each parent speaks his or her own native language with their child.  So, for example, Mum speaks Italian and Dad English. This is what’s generally known as the “one parent, one language” strategy. In other families, both parents speak the same language, for example Arabic, and the child only comes into contact with the language of the wider community at a childcare centre, in the playgroup or at school. Some children hear their two languages from native speakers, whereas others also get language input from people who are less fluent in the language in question.  In some families there are other family members in the neighborhood who speak the home (heritage or minority) language to the child, while in other families this language is only spoken by one parent and no one else. All in all, this means that there can be big differences between children in how much language they hear and what kind of language they hear, and this holds for both their languages. In this second episode of the English edition of  Kletsheads, together with Professor Erika Hoff, we explore the extent to which these differences affect the language development of bilingual children. Our Kletshead of the week (starts 18:05) is French-English bilingual boy, Loïc, and in Let’s Klets (starts 35:28) we speak to secondary school teacher, Marjolein Koster-Leppink, who tells us why she decided to speak her second language to her child.

Erika Hoff is Professor of Developmental Psychology at Florida Atlantic University in the USA. She is world-renowned for her research into the language development of bilingual and monolingual children and currently leads a research project following a large group of Spanish-English bilingual children from 2½ years of age up to and including their tenth birthday. In her research, she focuses on the factors in the young child’s environment which predict later language development. Our conversation took place in June 2019 when Erika was a guest researcher at Radboud University.

Marjolein is trained as an English teacher and since 2016 has worked as a teacher trainer at Windesheim University of Applied Sciences . She is a native speaker of Dutch and studied English at Utrecht University. As you’ll hear, her English is amazing, and she tells us how she already decided to speak English with her future children back in her student days. She now has a son, Owen, who is almost 2 years old, and in addition to her native Dutch, she regularly uses English with him whenever she can.