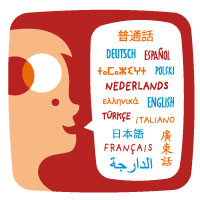 How bilingual children’s languages influence each other [Season 1, Episode 10]

“You’re wobbling the whole time the table! This is what my bilingual son said to his sister when they were playing a board game sat together at a small table and big sister was apparently also playing with the table leg. His message was clear. Big sister stopped and the game continued. What struck me most about this conversation was the way in which my son had chosen to phrase his message: his sentence was perfectly ok English, and his sister clearly understoond him, but I am certain that his English-speaking cousins in England would have said it differently. They would have switched the words around and said “You’re wobbling the table the whole time” instead. This is a wonderful example of what we call cross-linguistic influence. The way in which my son put together his sentence was clearly influenced by the fact that he speaks Dutch as well as English, because in Dutch, “de hele tijd” (the Dutch for “the whole time”) comes before “de tafel” (the Dutch for “the table”) and not after it.

Bilingual children sometimes sound different to children who only speak one language. They sometimes say things in a slightly different way, and this is often related to how their other language works. Why do bilingual children do this? What does this tell us about their language development? Why do some bilingual children do it more often than others? Is cross-linguistic influence something to worry about or is it part and parcel of being bilingual? These are all questions that we answer in this episode of Kletsheads, the last episode of season 1, together with fellow researcher Chantal van Dijk.

We learn that cross-linguistic influence is part and parcel of being bilingual. This is because the two languages of a multilingual are connected to each other. Some researchers even claim that certain grammatical rules are shared between languages, for example if they are the same in the two languages. We also hear that language dominance can have an effect on when one language influences the other: if bilingual children are much stronger in one of their languages, their stronger language usually influences the weaker language, although cross-linguistic influence in the other direction – that is, from the weaker language to the stronger language – is still possible.

In Let’s Klets (starts at 14:30) we talk to Martha, a mum here in the Netherlands who grew up herself as a bilingual child. She talks about deciding which of her two languages (English and Dutch) she should speak to her son, and about the challenges her family faced during the lockdown and once her son went back to school. And we hear from trilingual 12-year-old Nicole (starts at 37:08). She’s growing with with Dutch, English and Italian. She tells us about why she thinks it’s important for her to speak Italian (to speak to her grandparents) and how some words can be a bit confusing because they sound the same but mean something different.

Chantal van Dijk is a postdoctoral researcher at the Radboud University in Nijmegen where she is conducting research within the 2in1 project on the language development of bilingual children and in particular cross-linguistic influence. In September 2021 she will defend her thesis with four different studies on this topic. In the podcast, she talked about a large study that we carried out together, a “meta-analysis” where we pooled together data from over 700 bilingual children, 700 monolingual children, and 17 unique language combinations, to find out which factors predict whenand how much cross-linguistic influence takes place. The article is published in the Journal of Child Language and you can access it here. As I said in the podcast, it’s written for an academic audience so it does contain quite a lot of jargon.